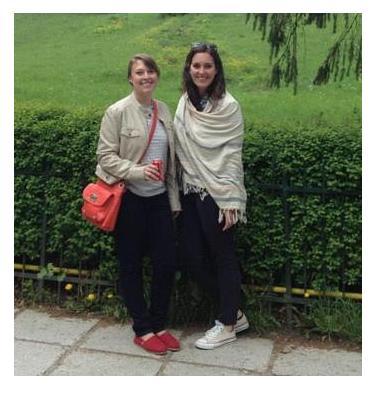 I don’t know if you remember, but I’ve started a sort of a soap opera about Dallas on my blog. (No? Well, you can quickly read episode one, two and three. I guarantee you, it will be worth it.) Since the episode three and the “To be continued” tag, everybody was wondering when I was going to wrap everything up. “Lack of ideas? Lack of inspiration? Lack of time? Or just forgetting about it?”.

None of it. I was just awaiting the visit of the two young and beautiful Texan girls to tell us everything from their perspective, too. So, just follow the interview below.

Vicky: It’s not ALL we’re about, but it’s definitely a part of our past and still relevant today. Oil, gas and energy make a big impact on the economy of Texas – and that’s a good thing, because that means they need PR people too 🙂

2. One building. One type of food. One beer. All representative for Dallas/Texas.

Jordan: It’s hard to think of one building that represents Dallas, but Southfork Ranch might be the most notable in Bucharest. Tex-Mex is extremely popular in Texas. It’s basically a localized version of Mexican food, and it is delicious. Texas has a lot of breweries that offer some great beer! Shiner Bock is one of the most well-known.

3. What do Romanians have in common with Texans?

Vicky: This one is easy—a love of FOOD! Texans love everything from “Tex-Mex” (a fusion with Mexican cuisine) to barbeque, to Gulf Coast seafood. I’ve seen the same thing during our stay; Bucharest has so many different types of restaurants and specialities. I ate traditional Romanian food, stellar French dishes, Portuguese, Arabian and so much more. I was never hungry on this trip!

Jordan: Every year our company sends a survey to everyone in the company about employee satisfaction. The Bucharest and Dallas office voted the highest in last year’s survey. The leadership in both offices decided to do a cultural exchange program and send representatives for each office. Roxana (Diba) came to Dallas last fall to experience the Texas life. Lucky for us, Vicky and I were selected to visit GH Bucharest! I know I can speak for Vicky when I say it was the trip of a lifetime.

5. What did you expect to find here, after the Google-search? Is there anything different?

Vicky: One thing research can’t predict is the people. Everyone I came across was so friendly and warm. Bucharest seems so full of life, and I think that’s definitely because its residents are so energetic.

6. What do you love most about Romania/Bucharest?

Jordan: I LOVED everything about Romania! From the beautiful buildings, to the delicious food (I particularly loved mici, polenta and zacusca), to the Romanian beer, it was all incredible. If I had to choose what I loved most, I would have to say the wonderful people! Texas is known for being friendly and having “southern hospitality.” While that is true, the people in Romania were some of the nicest and friendliest I have ever met. Don’t tell my friends this…but Romanians are some of the most fun too!

7. Is there something that impressed you the most?

Vicky: I’m so impressed with my Romanian coworkers at GolinHarris! You all are so, so dedicated to your careers. You all manage to balance work and personal lives to give you the best of both. I can tell your clients greatly appreciate and respect your work, and you’re truly leading the industry here.

Jordan: If you or your readers are ever in Dallas, let us know and we’d love to show you around.

This site uses Akismet to reduce spam. Learn how your comment data is processed.

This website uses cookies to improve your experience while you navigate through the website. Out of these cookies, the cookies that are categorized as necessary are stored on your browser as they are essential for the working of basic functionalities of the website. We also use third-party cookies that help us analyze and understand how you use this website. These cookies will be stored in your browser only with your consent. You also have the option to opt-out of these cookies. But opting out of some of these cookies may have an effect on your browsing experience.
Necessary Always Enabled
Necessary cookies are absolutely essential for the website to function properly. This category only includes cookies that ensures basic functionalities and security features of the website. These cookies do not store any personal information.
Non-necessary
Any cookies that may not be particularly necessary for the website to function and is used specifically to collect user personal data via analytics, ads, other embedded contents are termed as non-necessary cookies. It is mandatory to procure user consent prior to running these cookies on your website.
SAVE & ACCEPT